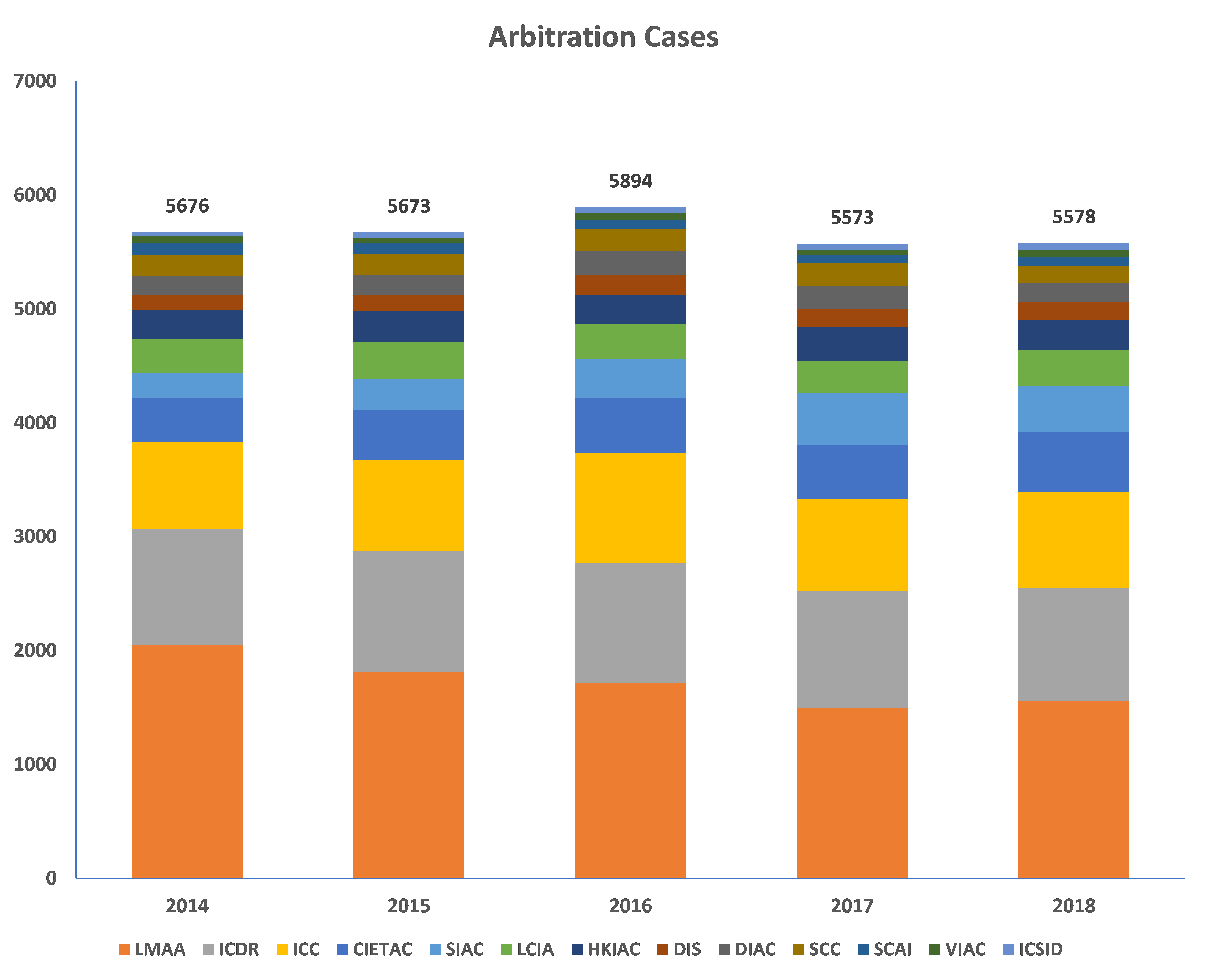 The London based LMAA oversees the most cases, however the Paris based ICC is handles the largest aggregate value of disputes. The total global value of international disputes is estimated at US$ 86 billion in 2018. 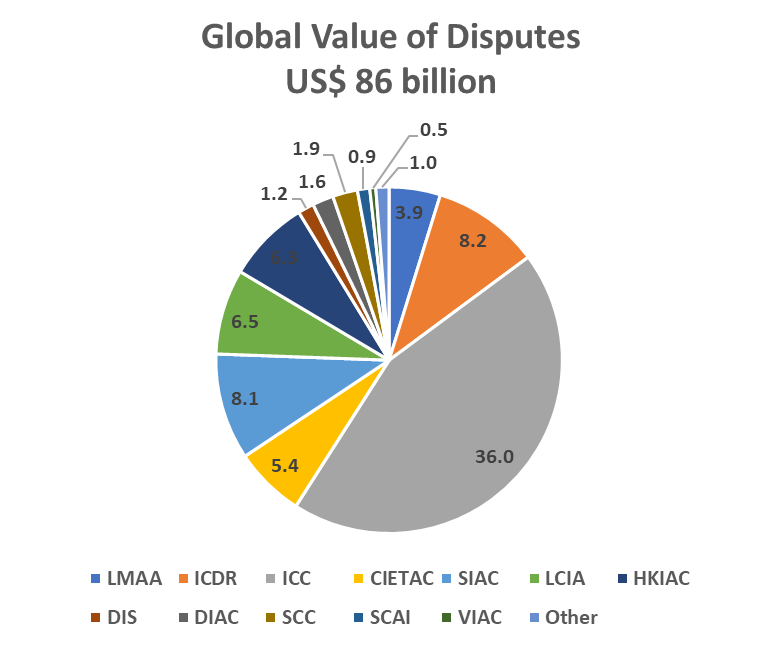 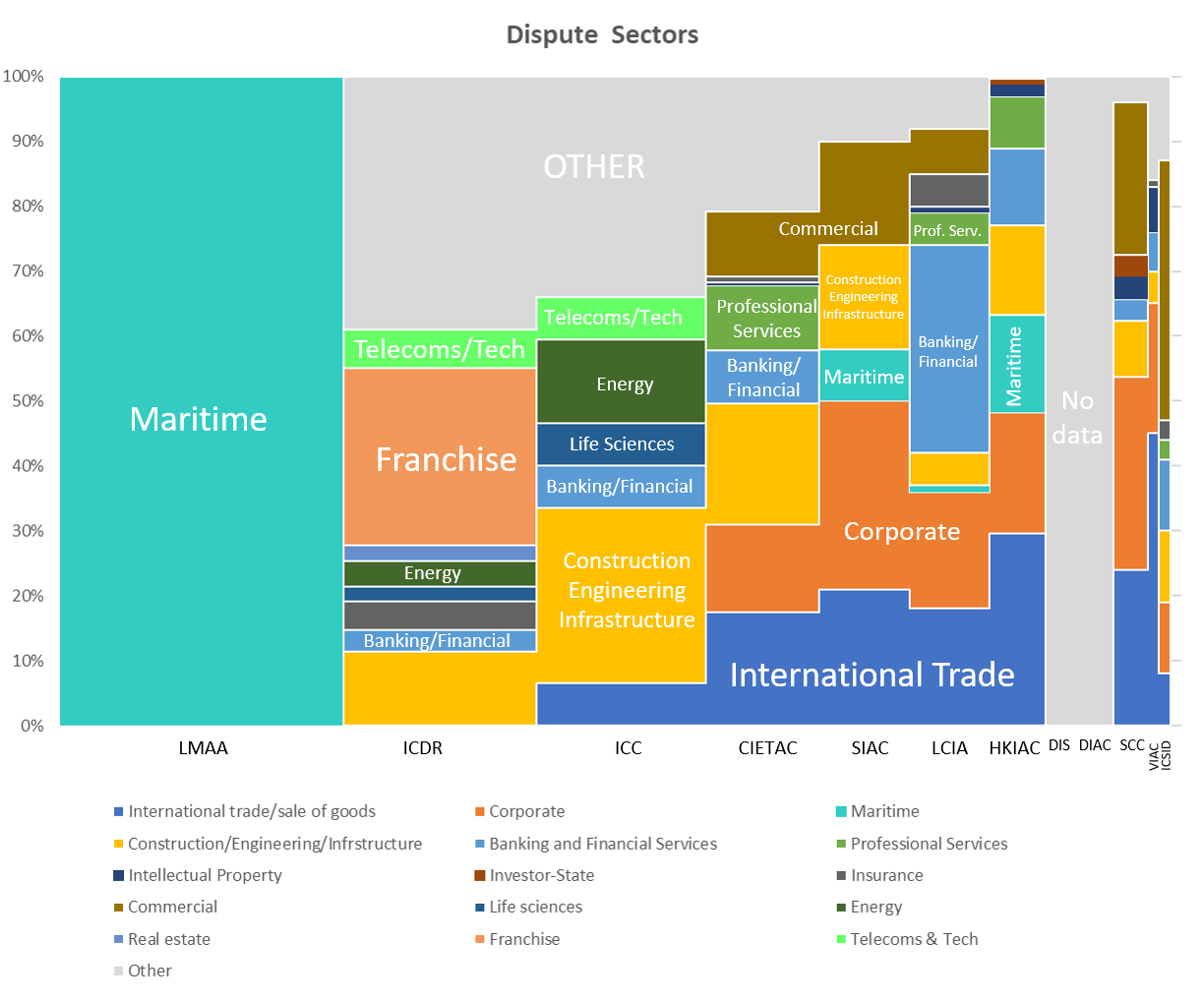 The LMAA deals with maritime related disputes and has more cases per year than any other arbitration organisation. In 2018 LMAA Members dealt with 2,600 new arbitration appointments and over 500 awards were published. LMAA members usually accept arbitration under LMAA terms and therefore apply to and govern the procedure adopted in the arbitration reference of the LMAA. There are also Small Claims Procedure (SCP), Fast and Low Cost Arbitration (FALCA) and Mediation Terms which offer a wide range of options to those involved in maritime disputes.

The LCIA is one of the world’s leading international institutions for commercial dispute resolution. The LCIA claims to provide “efficient, flexible and impartial administration” of arbitration and other ADR proceedings, regardless of location, and under any system of law. On average over 80% of parties in LCIA cases are not of English nationality. The LCIA employs arbitrators, mediators and experts from many jurisdictions, and with a wide range of expertise. The dispute resolution service is available to all parties including non-members.

Headquartered in Paris, the ICC is the institutional representative of more than 45 million companies in over 100 countries with a mission to make business work for everyone, every day, everywhere.

The ICC promotes international trade, responsible business conduct and a global approach to regulation, in addition to providing market-leading dispute resolution services. Their members include many of the world’s leading companies, SMEs, business associations and local chambers of commerce.

The ICC aims to bridge the public and private sectors and seeks to represent business interests at the highest levels of intergovernmental decision-making,  such as at the World Trade Organization, the United Nations and the G20.  The ICC specialises in business and legal training and is a publisher of practical tools for international business, banking and arbitration.

SIAC is a global arbitral institution providing cost-competitive and efficient case management services to parties from all over the world. Launched in 1991m the SIAC is an independent, not-for-profit organisation, and has established a track record for providing best in class arbitration services to the global business community. SIAC arbitration awards have been enforced in many jurisdictions including Australia, China, Hong Kong SAR, India, Indonesia, Jordan, Thailand, UK, USA and Vietnam, amongst other New York Convention signatories.

The Court's main functions include the supervision of case administration and the appointment of arbitrators. SIAC has an experienced international panel of over 500 expert arbitrators from over 40 jurisdictions with specialist knowledge in areas such as  Energy, Engineering, Procurement and Construction.

The SIAC Rules provide a procedural framework for efficient, expert and enforceable resolution of international disputes of all sizes and complexities involving parties from diverse legal systems and cultures.

Established in 1985 by a group of leading businesspeople and professionals in an effort to meet the growing need for dispute resolution services in Asia. Originally funded by the Hong Kong business community and the Hong Kong Government, the HKIAC is financially self-sufficient, and completely free and independent from any type of influence or control.

The Arbitration Institute of the Stockholm Chamber of Commerce

The SCC is one of the world’s leading dispute resolution services and international commercial arbitration. Established in 1917, it is part of, but independent from, the Stockholm Chamber of Commerce. In the 1970's, the SCC was recognised as a neutral centre for the resolution of East West trade disputes by the United States, the Soviet Union and China.

Sweden and the SCC also play a unique role in the international system developed for bilateral and multilateral investment protection worldwide. In at least 120 of the current bilateral investment treaties (BITs) Sweden or the SCC is cited as the forum for resolving disputes between investors and the state. Today, the SCC is the world’s second largest institution for investment disputes.

The International Centre for Dispute Resolution

The ICDR is the international division of the American Arbitration Association (AAA) and claims to be the world’s leading provider of dispute resolution services for cross-border business transactions.

Launched in 1999 so that parties could use the AAA’s services but with a separate international operational structure that includes rules, arbitrators, mediators, administration, case-management staff, and executive management. The ICDR is invited and sought out collaboratively by industry groups, lawyer organizations, governments, educational institutions, arbitral institutions, and multilateral organizations like UNCITRAL.

Headquartered in Beijing, the China International Economic and Trade Arbitration Commission (CIETAC) is one of the major permanent arbitration institutions in the world. Formerly known as the Foreign Trade Arbitration Commission, CIETAC was set up in 1956. CIETAC independently and impartially resolves economic and trade disputes, as well as investment disputes by means of arbitration. CIETAC has 29 liaison offices in different regions and specific business sectors to provide parties with convenient arbitration advice.

In accordance with the New York Convention, CIETAC awards are recognized and enforceable 159 countries. CIETAC’s Nearly 30,000 concluded arbitration cases have involved parties from more than 100 countries and regions outside the Mainland China, and its awards have been recognized and enforced worldwide. Since 1990, CIETAC’s caseload has been one of the heaviest among the world’s major arbitration institutions, especially in recent years, CIETAC handled more than 2,000 cases annually on average.

The Chambers of Commerce and Industry of Basel, Bern, Geneva, Lausanne, Lucerne (Central Switzerland), Lugano, Neuchâtel and Zurich established the Swiss Chambers’ Arbitration Institution as a not-for-profit organisation which offers means of dispute resolution based on the Swiss Rules of International Arbitration and the Swiss Rules of Mediation. The Arbitration Court is an autonomous body. It carries out its functions in complete independence.

VIAC works for the settlement of commercial disputes in the regional and international community. It has benefited from its traditional position in a neutral country between east and west. Founded in 1975 as a department of the Austrian Federal Economic Chamber (“AFEC”), VIAC has in recent years enjoyed a steadily increasing caseload from a diverse range of parties spanning Europe, the Americas, and Asia.

The center benefits from a robust global network of leading arbitrators experienced in international arbitration under the Vienna Rules. Austria has adopted the UNICTRAL Model Law as its law of arbitration in 2006 with minor changes.

The ICSID provides for settlement of disputes by conciliation, arbitration or fact-finding. It is an independent  and a-political dispute-settlement institution. It is also available for state-state disputes under investment treaties and free trade agreements, and as an administrative registry.

The DIS is an association for the promotion of national and international arbitration, it provides administrated arbitral proceedings pursuant to the DIS Arbitration Rules and other procedures of alternative dispute resolution (ADR). Additionally, the DIS regularly organizes conferences and seminars for the further training of legal practitioners and other interested persons. It also publishes various publications on German and international arbitration law. It is particularly active in sports related disputes.

Initially established by the Dubai Chamber of Commerce and Industry (Dubai Chamber) in 1994 DIAC offers arbitration services and facilities on an international scale. It is the largest arbitration centre in the Middles East.  The DIAC provides efficient and impartial administration of commercial disputes as it is a non-profit that is independent in its operations from both the Government of Dubai and the Dubai Chamber. The DIAC has also developed a pool of experienced arbitrators from different nationalities and legal backgrounds.

ICAC aims to resolve disputes related to foreign trade, provided the place of business of one of the parties is situated abroad, and disputes arising in connection with activity of enterprises with foreign investments, international organizations and associations based in the Russian Federation. ICAC also resolves disputes which are subject to its jurisdiction by virtue of international treaties and agreements of the Russian Federation, including those signed by the USSR.