This article was researched and written by The Business Disputes Register (https://www.disputesregister.org)


On average, a company has a half percent chance of going into administration in any 12 month period. This average is misleadingly low because a very high proportion of companies are very young (young companies are unlikely to be insolvent in their first few months of existence). It is worth researching the age of the company you are dealing with because the insolvency rate changes significantly with age as can be seen in the adjoining chart.
Companies less than a year old are the least likely to go into administration within the next 6 months. This is not surprising as most start-ups have enough cash to last 18 months. However, the risk of going into administration shoots up during the first few months since the inception of the company reaching a first peak of 0.8% at 21 months. The companies that survive this first 21 month hurdle gain a reprieve as the administration rate drops to 0.55%, but only briefly as the rate starts to climb up again reaching a peak of just under 1% when companies reach 9 years of age. 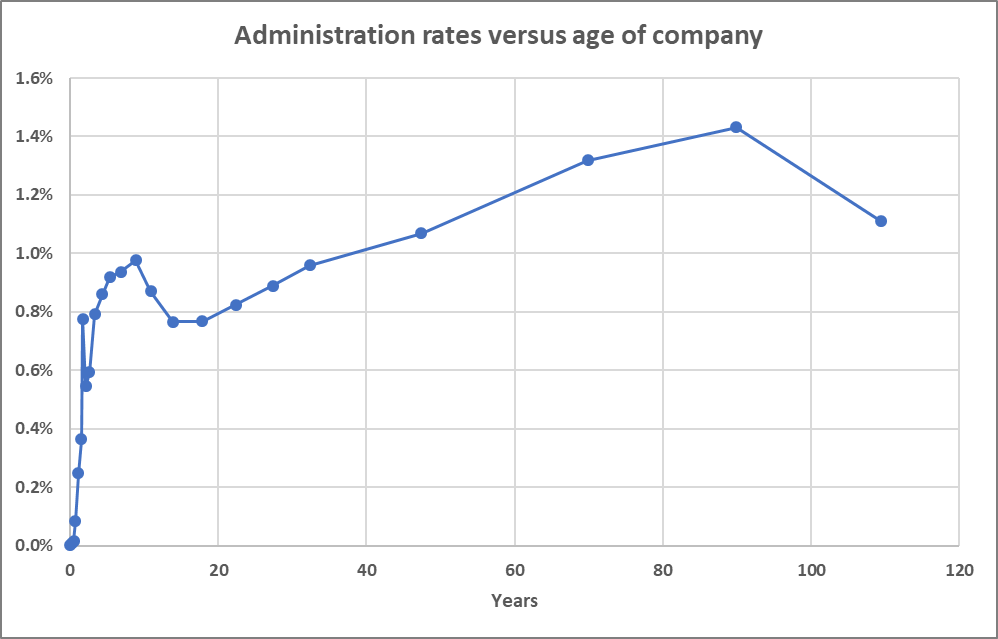 After 9 years, the prospects steadily get better. Probably due to experience gained, the companies are now better run and more resilient. 14 year-old companies are probably the safest to do business with. However, after 18 years, the survival prospects steadily and slowly get worse over time, presumably because they are increasingly outdated and increasingly complacent as they get older. Interestingly, the survival prospects of companies over 90 years old start to improve with age. It should be noted that the above is a generalisation. The pattern varies for different industries as can be seen in the following 3 examples: 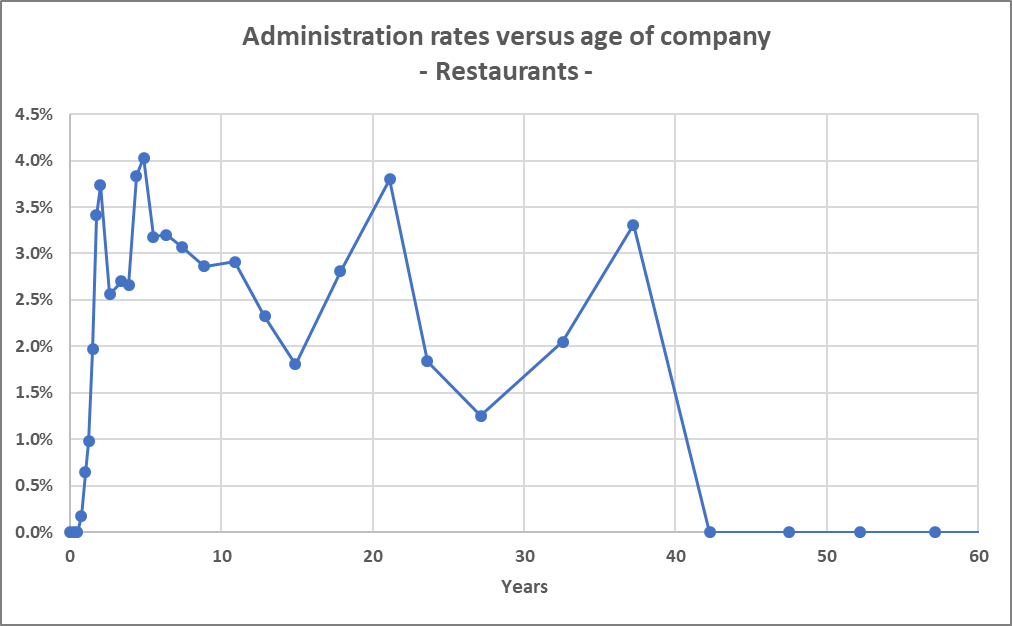 
Analysis of the 23,000 actively trading pubs registered at companies house shows that the administration life curve for pubs and clubs is similar to restaurants but with only 2 hurdles. The first administrations peak is at about 3.7% and takes place between 3 and 5 years of age. The rate subsequently rapidly declines to about 1.5% years till pubs reach an age of 20 years. Thereafter the rate climbs upwards over the next 40 years to 4% by the time they are 60 years old and then accelerates to close to 9% by the time they are 80 years old. Similarly to restaurants, above a certain age (80 years in the case of pubs), pubs do not seem to go bust. 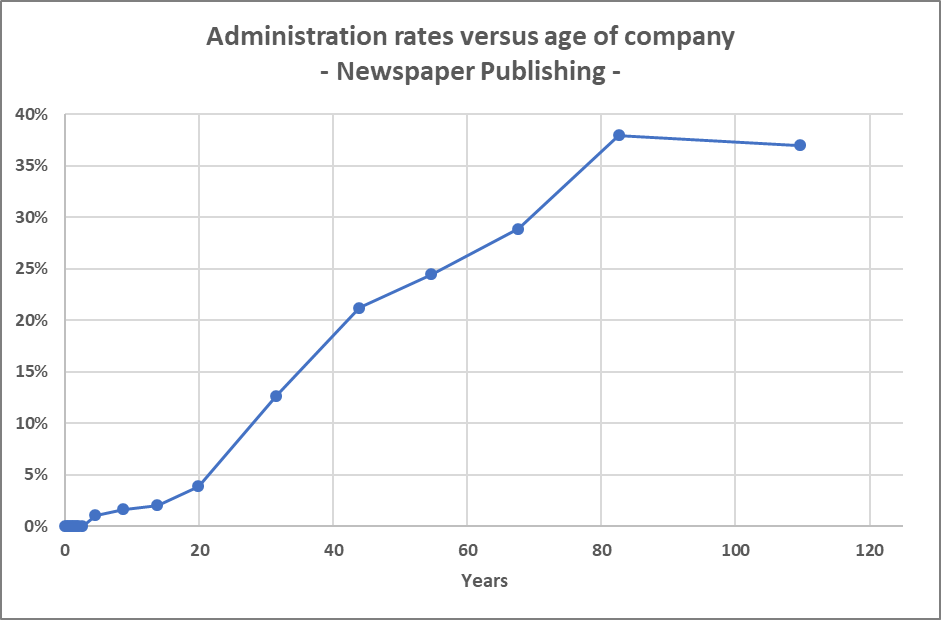 Counter-intuitively, Public Limited Companies are most likely to go into administration than any other type of company, this is despite (or perhaps due to) easier access to capital, regulatory oversight and public scrutiny.

PLCs are more likely to survive the first two years of their existence than Private limited companies, however, thereafter they become significantly more likely to go into administration. 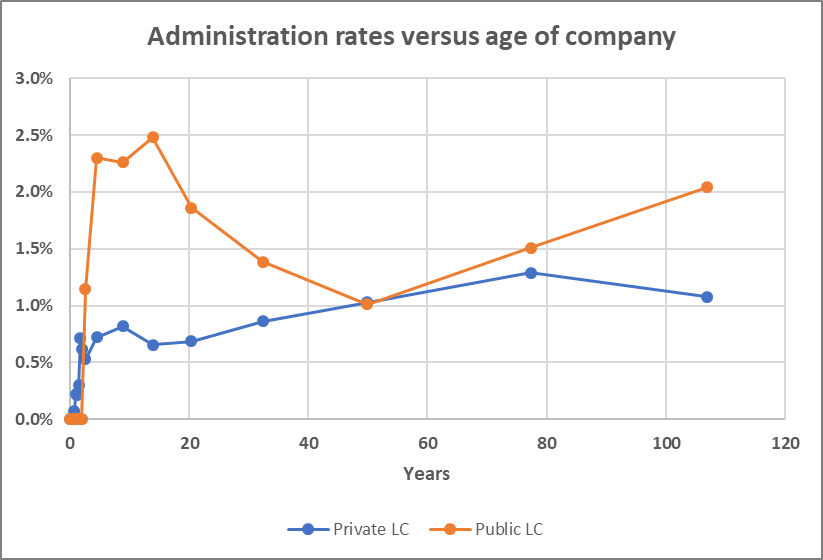 
It is worthwhile to check the accounting year-end month of the company you are doing business with because there is a surprisingly pronounced variance in administration rates depending on the month. For example, as can be seen from the chart below a company with year end of July has over double the risk of being in administration compared to a company with a year end of March. 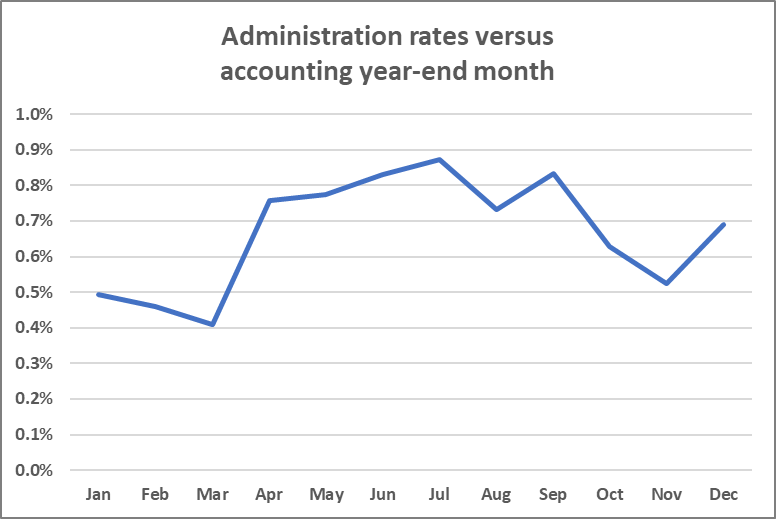